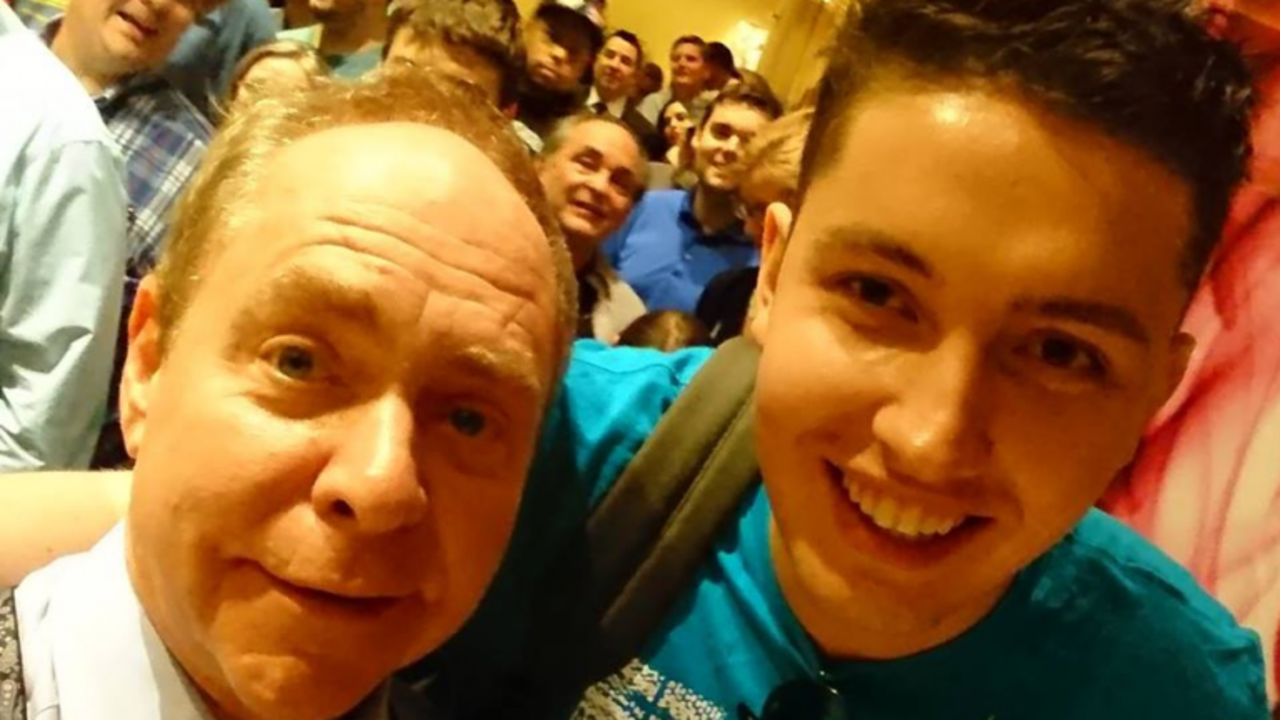 Sooooo I decided to close this thread in the middle of June 2017 because things were reeeeeaaally tough, and not going well at all. I felt like I was just posting negative stuff, I was getting trolled hard (“omg why are you grinding 2/5 when you’re on holiday?!!” etc etc), and it just wasn’t enjoyable to update. Things aren’t going well since returning from LV and I’m not quite ready to update regularly, but gonna post a wee recap of everything that happened while I was there.

I went to WSOP 2017 staked despite having almost twice the BR I had for WSOP 2016 when I had all my own action. I was grinding 2/5 and it wasn’t going well at all. I was making small mistakes here and there, but not to the point where I should be down $10k. I started to recover and decided to flick in a $600 event at The Wynn on 29th June. I played the 2nd day 1. The first day was an absolute rollercoaster of an event, where I saw one of the scummiest things in my life, which massively helped me in the long run. I’m trawling through the massive “Vegas 2017” WhatsApp group, so updates are a bit higgilty-piggilty.

150/300/25, few limps, French guy to my left who I’d been chatting away to all day and was such a lovely guy, raises to 2050, he has 1x5k behind. He then proceeds to put his left hand over the top of the 5k chip while the action goes back round to the first limper. I realize what’s going on and immmmmmmediately call the guy out as loudly as he can. He gives a shocked “ohhh je suis desolee” and lifts his hand. The first limper after the hand catches my eye and mouths the word “thanks”. French guy knew exactly what he was doing. That’s not even the scummy thing that happened that day!

This is the scummy thing. American 30s reg goes all in from CO or HJ pre. English guy in his 40s who looks like a hardy fella calls on btn. English guy cleeeeeeearly has him covered. English guy wins, American guy STANDS UP, starts packing his **** up, and then sees that the dealer hasn’t taken all his chips and that he’s left with like 10bb, doesn’t say anything sits back down, and next hand jams pre. Nobody has noticed what he’s done, folds to an English guy, he’s looking at the American guy quizzically and says “didn’t I bust you?”, The American guy is silent, English guy starts going mad at the dealer, dealer calls floor, Floor hears the words “so last hand this guy jams…” and says “lemme stop you there, if it was the hand previously, there’s nothing I can do about it”. English guy is understandably raging, calls w KJ, American guy has JTs and obv doubles. I spent the rest of the day loudly telling anyone who joined our table to watch out for seat 3 because he was a cheater. He was mortified but just sat there and silently took it. I’m actually getting angry remembering all this haha.

After dinner I shove A8s from MPish, American scumbag calls w AJo and I’m just sitting there like god one ****ing time one ****ing time please god. 8 ott. I go “ooooohhh….. KARMA” and he still says nothing.

Towards the end of the day UTG jams. I’m +1 and re-jam TT. Btn re-rejams and I know I’m fkd. Utg has AJo, btn has JJ. 8 high flop. Turn is a ten and the btn acts as if he’s just lost a flip on the bubble of the November 9. Absolutely raging he was.

Little later I got KK vs AA and lost a chunk. Little later I co opens, btn calls, I shove 13bb w 66 and somehow get it thru. (I’m doing this all thru what I was sending ppl on WhatsApp, the memories are flooding back now).

CO Lithuanian reg (looked like a tough tough dude) opens CO, I defend BB w QJo. Flop is KJxhh. He cbets 8k we call. J turn goes xx. River brick I bet 22k and he calls and mucks. Settles me right the **** down! Get itm with a healthy enough stack.

3bet jam AJo, get the fold. MP then jams QTs, we call BB w KQs and lose. Down to 9bb and feeling a little gutted. 58 left. Is the dream over?

Shove QQ utg. No callers. 20 mins later shove AA utg. No callers. Lithuanian reg opens, American older fish jams btn, we have AKdd and re-jam. Lithuania folds. “I don’t get a pair son”. Relief. Flips over AKo. Meh. Flop 2 diamonds. Turn diamond. Yippee! Poor guy spent the rest of the time he was playing telling me if I win I have to remember him because of that hand.

Few hands later I open QQ on btn. SB new to the table, fairly short, he jams. BB goes into tank, American reg in his 20s. Handsome dude. Re-jams. Hero snaps. QQ vs AK vs AK. My hands are shaking. I fade flop and I just knew after that I was holding. 625k, avg stack is 400k. We actually have a shot at this.

380k at dinner. 16bbs. 21 players left. Go to Allegro restaurant and eat my bodyweight in pasta.

Fat Mexican fish opens UTG. Hero looks down two nines in MP. “Dealer? I’m all in.” Folds round to Mehico who snaps. I groan. I show first and he sighs. A glimmer of hope. AKo. ****ing hold. I say “flippidy flip!” really loudly to the guy as the dealer prepares the flop. 9T3. Joy! Dealer says “not any more” in reference to my flip comment. J turn and whole table goes “OHHHH DEALER WHAT HAVE YOU DONE”. A river. “Nine ball corner pocket” I say in my head as I breathe an almighty sigh of relief.

800k. Very next hand I put my new chips to work. Open AJss in EP, a different Lithuanian reg calls, somebody else calls. T63ss flop. I bet standard. Only Lithy calls. brick turn, I ping in 225k into **** knows what and he takes 3 minutes and folds. Was getting ready to put alllll the chips in OTR.

Make the FT with 2.7m (rly wish I’d logged more hands ffs). Guy to my left, really really nice German guy who I hadn’t played with busts the first hand. He looks crestfallen. I tell myself it won’t be me.

I open Q9hh in MP to 105k, sb puts in 150k, dealer insists it’s a raise, he insists it isn’t, there’s a total hoo-haa while they do the math, turns out it is just AND ONLY JUST a raise. Folded to me. I say “hey sorry man but I have a hand” and jam. He rage snap folds. Tempted to show q9hh, keep it to myself. As smit later said, would’ve been funny if he had AA.

Lithuanian reg from the first hands of the day shoves A7 in CO. We re-shove AK in sb. Board bricks out and he looks like he’s never wanted anything more in his life than to see a 7. 7 left. We’re second.

Win AK vs AQ. 6 left. First by a little bit. Payouts are as follows

Other Lithuanian guy to my left. I play a very stupid pot with him where he 3bets me pre sb vs btn, I defend 89s, and he bet/x/bet on J8325. I tank call river and he shows me JTo. Blakkman went through me on Whatsapp for that one.

4/6 and feel like the dream is dying. Break straight after that. I go outside, close my eyes, regain composure. Back at it. Guy to my right, idiot fish wins AK vs KK. Sigh. He’s starting to get very tilted because Lithy doesn’t want to deal.

CO who minraise/folded by mistake opens JJ. I shove QQ in SB. I have him covered. He takes 60 seconds and calls. I’m suprised by this, thought this’d be a slam dunk snap. We hold. Back in it with 5 left.

MMASherdog, Andreas, Max & Alex all behind me railing me. Absolutely overwhelmed by the support both behind me and from all my friends.

3.8m at 60k/120k. 3 left. Me, Lithuanian reg, and idiot fish. An absolute battle, but Lithy’s experience and quality starts to show.

They put the trophy on the table. It suddenly hits home how close I am.

Lithuania is running over us both. I’m card dead and trying to fight back, but there’s only so much I can do. I have A3dd on btn, open to 2.1x, Lithy 3balls from sb, I’m just ahead of 3rd place but way behind 1st. He’s very aggro, I have enough fold equity, and I need chips. “I’m all in.”

A3dd vs AKo. My mini-rail all stand up and rush over to the table as if it’s their own tournament life on the line.

King in the window. Gg.

A mixture of amazement, mild disappointment and exhaustion sink in at what was without a doubt the best day of my life. I had given it absolutely everything I had, I had run so well, and I was 35k richer for my efforts. I take Lithy to the side before they go HU, shake his hand and tell him how well he played. For the first time that day he didn’t look like a robot, but looked humbled and thanked me too. Shook the fishes hand (apparently he started open jamming HU and lasted 3 hands lol), and went to do the paperwork.

Will update about the next bink in a few more days.