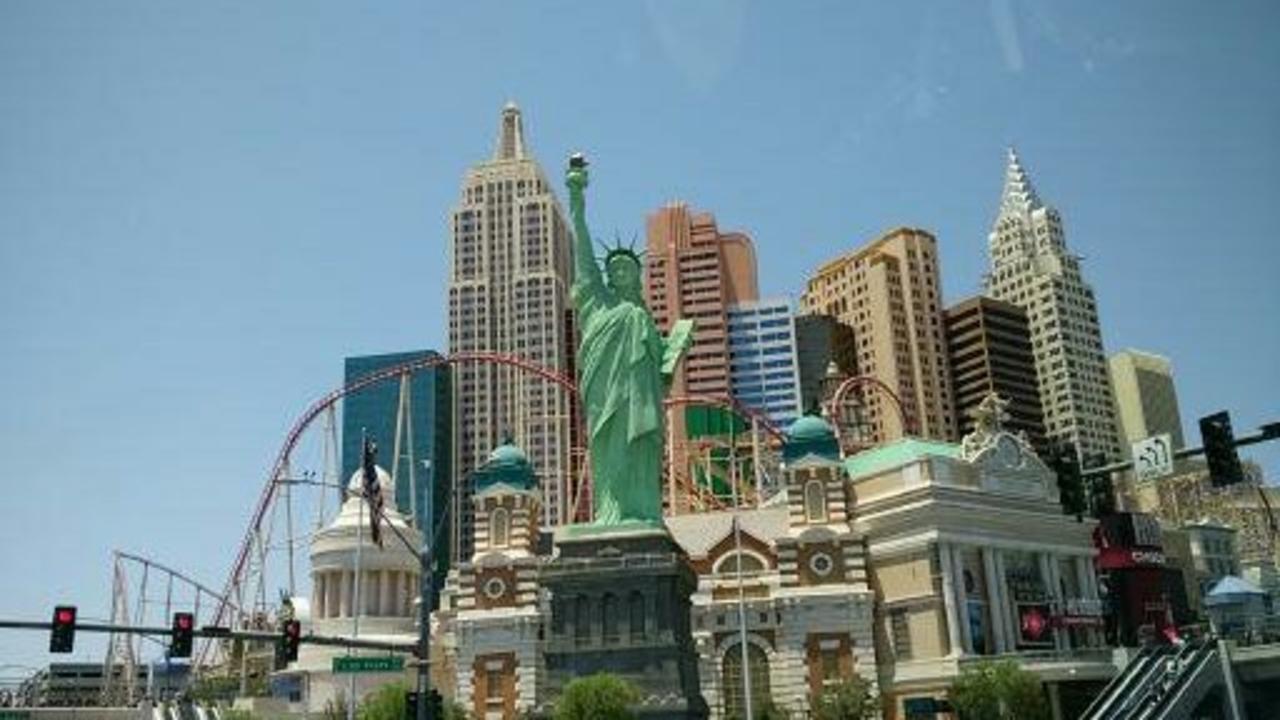 This Blog will cover my Vegas trip so far and what else is planned for the next weeks/months in the US.

The trip started on 14th of June in Vienna, and after 15 hours and one stop in Munich, I finally arrived in Vegas. Pretty cool thing was that I was sitting next to Pjanic and Benatia from Juventus Turin on my plain.

As we had an Airbnb from 15th of June – 15th of July I had to stay a night at a hotel and choose RIO, which was very cheap 70$ (after tax and fees) although I just booked in the morning before I flew.

On the next day, I had to go and pick up some money from a friend, and at 3 pm I could finally move into our house.

Although we thought the house has a pool, we got kinda scammed, as in reality the pool will be built in after our stay, although the pics on the site showed a pool. But instead of a pool, we had like a dozen of Scorpions

Although we were only five guys booking the house, at one point there were over ten people sleeping here.

Since 15th we are staying at Luxor, but we move today, as the rate would be 300$ for 1night this weekend.

As I mentioned in my last Blog update, I wanted to do a lot of nonpoker things as well.

I wanted to go to EDC, but after no one wanted to join me and the Uber Drivers told me that it would take hours to get there, I decided to skip it this time. So far we went to David Copperfield, Fantasy and UFC.

Although I am more of a recreational UFC fan, I enjoyed the show, especially as I was betting against Bit2Easy and won some money doing that.

When we go to a restaurant or have to pay anything, we go for the good old flip to find out who has to pay, and so far I feel like losing every major flip.

For example yesterday we extended our stay at Luxor for another night, and we flipped three times.
1x for who has to go down and tell the receptionist
2x for 50% of the room (200$).

I ended up winning the first flip but lost the way more important ones and ended up paying the room.

So far I didn’t really go to many  Clubs, I think just 2-3 times. Which was not that much fun, basically at the beginning of the trip I was motivated, but the guys were mostly focused on grinding. While later when two of my real-life friends came, I was already kinda exhausted and lost a lot of my motivation. I think Me two years ago would enjoy the parties.

Besides that I went to 2 different Shisha/Hookah Bars, tbh they all suck. They are nearly as bad as they are in Malta. We even went to one where only locals go, and even there the shisha burned immediately. Also failed to tip the bouncer. When we came, there was a 10-meter line of people waiting to enter the bar, so I tried to give the bouncer 100$, but he rejected it with the words ” I appreciate it, but there is the line,”…

On 4th of July weekend, we went to Omnia. I came there at 11:30 pm and the normal line was outside the hotel for over 200 meters. This was the sickest line I have ever seen. I ended up paying 75$ to get in quicker, but one of our students was there already 2 hours before me waiting in the line and came in 2 hours after me. He ended up also paying 60$ as there were so many people interested in entering the club.

Since 1st of July weed is legal in Nevada and so we bought a bit and were smoking 1-2 times so far.
I usually can’t smoke a joint (asthma) we had to try to smoke it in my shisha (which I bought after two days) and worked perfectly.

BluffTheSpot Coach GazzyB123 was also in Vegas, and at one point he and one of our students moved in with us for 4-5 days, as their Airbnb ran out.Gazzy was crushing the Wynn MTTs by making 2 Final Tables and taking home one trophy for over 40k total,

After the normal grind, we played RunItThrice 5-10-15 mostly 3handed, and Gazzy managed to lose around 10k of his MTT winnings. Obv he was very tilted and left Vegas pretty quickly. But he forgot his Trophy and his iPad.

My gameplan was to play the 3k 6max FLH, 10k FLH, Main and the rest either online or live 100/200 FLH+. Unfortunately, I ended up only playing the 3k FLH and not that much live limit holdem as I wanted to. The highest game running was 80/160, and although the game is great, I think my hourly is way higher online and also by playing online I would be able to have more time to do shows/ Gym/ eating healthy, etc.

Online was running very bad. I am mainly playing 500-5k there, and I am down like 20K€ while running over 30K€ under all in EV.

As said I only played 1 Tournament, and that was the 3k FLH 6max, where I busted after 5 hours. My table had no real fish, the “regs” were ofc not very good, and I saw some small mistakes. None of them would beat 5/T+ online, but all of them would be at least BE at 1/2. The 80/160 game I played was softer than the 3k.

Overall I think I played three times NL200 or NL300 live to get free drinks before I went out with my RL friends (both guys play/played midstakes online). One time at PlanetHollywood, we ended up on a table with three British online pros who had the same idea. That was for sure the toughest NL200 game in Vegas.^^

Another time we went to Mandalay Bay and there I played maybe the funniest hand of my life.

Semi Fish opens and I 3bet on the CO to 35 with QQ. He goes all in for 500$. I start thinking and talking to him. Suddenly he turns one card over, and it is an “Ace.”  At this point, I am thinking to call, as I would guess he always has AK. I am still sitting there and think. Suddenly before I do anything, he turns over his 2nd card, and it is another “Ace.” He open shows AA, and I ended up folding obv.

My real life friends are already pretty drunk and ended up in a short discussion with him:

Last 1-2 weeks I ended up playing mostly live NL. Where I had two very sick sessions.

Ended up losing 35K, but as far as I remember, there were no really big pots I lost. Just didn’t hit too much and got hero called sometimes.

One hand was very interesting IMO.

I don’t exactly remember the action. But it was a 3bet Pot (I was IP and the 3bettor), and it was checked down to the river. I have AQ on AJT84. Villain bets 500 into 1,7k. I raise to 1,5k, and he makes it 6k after 5 min.I ended up calling here and depending on my strategy you can find many reasons for it or against, depends a lot on your approach to poker. My reason why called is that I think he never has a straight (because it is a way better strategy to overbet or c/r it.

And so the only hands I though which make sense are weak Ax, strong Jx, and hands like JJ, AJ (based that he blocks some of my stronger calls and might expect me not to call enough against a bigger size and ofc they are hands which can bet/3bet when he expects me to value raise AQ for example.

I ended up calling because I expect him to not 3bet AJ, JJ all the time (especially for that size) and also it is highly discounted as he could play them differently on streets before. While hands like QJ, KJ, are way clearer in his range. So I conclude that he is very likely to overbluffs this spot and so I make the call. He had KJs,

Everyone was around 300–1kbbs deep. At the beginning I was up 20K, but ended up losing a 40k pot against the fish ( I hero called him with Jx on J42d7dQ after he c/r me on the Turn, he already did that 2 times against me, and I always folded and also have seen him c/r a similar spot with no equity when he was 100K deep with another guy and he also managed to call a 4bet with 64o against the other fish who had 100bbs)

The next supermarket next to our house was a WholeFoods which was is fkn expensive if you compare it to normal stores. What I like a lot are the long opening hours of the supermarkets.For example yesterday we went to WholeMart at 3 am in the morining and had short race with the “fat people shopping venture.

Pokerwise I am running very bad so far and lost a lot of money, which also took a lot of my motivation for other stuff. At the moment I am not even sure how long I stay here, at the beginning I wanted to stay 90 days and go to LA, Hawaii, NY,… But atm I rather go back to Austria and take 1-2 weeks off and get a clear head.

We proudly stay till 24th in Vegas and go to Calvin Harris, Chainsmokers and Zedd the next days and also to 1-2 further shows.

After that LA. I am not sure how long I stay, I have to talk to my friends what he wants to do exactly, but probably I will short down my trip and just stay 1-2 weeks in LA instead of 3 weeks and also skip Hawaii, San Diego, San Francisco and Washington and just go after that 1 week either to Miami or directly to NYC.